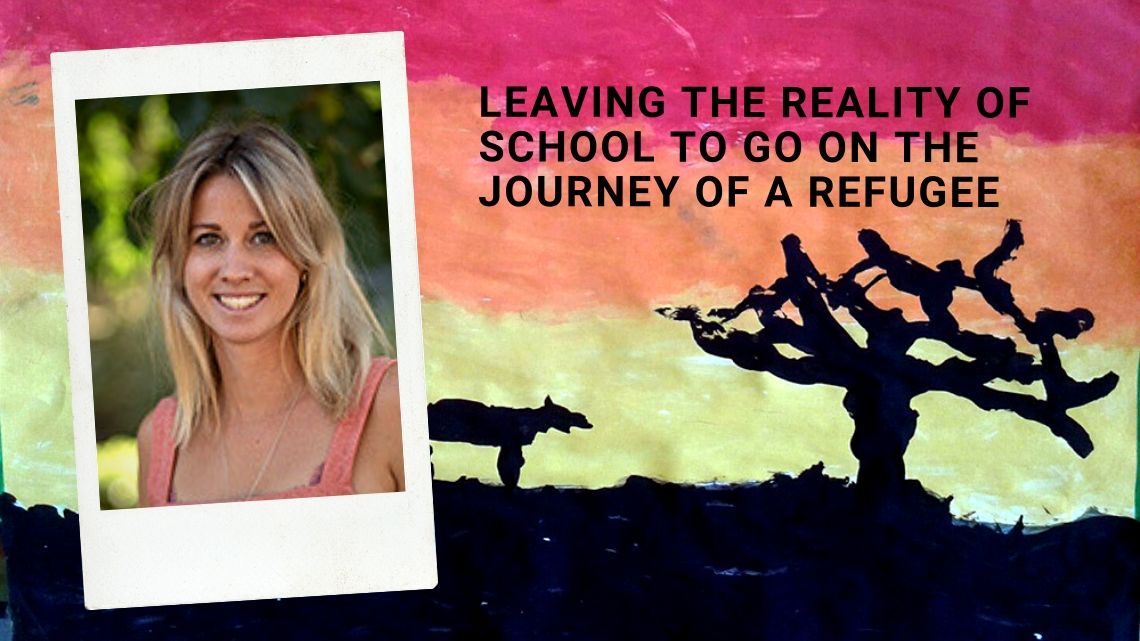 Alice Manning with the teachers of the Colegio Britanico De Sevilla. Alice Manning explains how a theme week in an international school raised awareness of the world-wide refugee situation.

We are a small international school based in Seville, Spain, which serves children from nursery through to college on the same premises. All the lessons are taught in English, from history to physical education and each class receives a 45-minute Spanish lesson each day based on the class topics.
As a British school in Spain, with Spanish children, mainly British teachers and others from Germany and Spain, we are always trying to ensure that children havé a good cultural understanding and awareness of diversity. When CBS (Colegio Britanico de Sevilla) first discussed the idea of having a refugee week, we all agreed that this would be a great way to educate both the children and ourselves about current issues. At the time we had no refugees, so the word ‘refugee’ was new for many in the school, who in addition had little knowledge of the extent of the struggles that many people face every day.

Linking with a Human Rights organisation

We have worked with CEAR (Comision Espanola de Ayuda al Refugiado) before. CEAR is a non-profit organisation that defends and promotes Human Rights by directing their actions and campaigns to governments, institutions, parliamentary groups and political parties as well as citizens. CEAR also carries out concrete actions before European, state and local courts in order to generate change. One aspect of Human Rights they appeal for is migration and asylum. Whilst they campaign politically, on a practical level they also support refugees that come to Spain, helping to house and guide them as well as educating local people about how they can support CEAR. As a school we wanted to support and raise awareness of the work they do every day to try and better the lives of refugees. We felt that linking with them would strengthen the impact of our refugee week.
CEAR gave us advice about what we should include in the week and how we might make it child-friendly, but also an educational success that would have an impact on the children. We all agreed that books are one of the most powerful ways to help children to understand the world around them, as well as having first hand experiences. We used many books to structure the week and help the children to understand the refugee crisis.

One picture book proved particularly effective in generating responses: The Journey (Sanna 2016). This is a powerful book and I would happily recommend it. It is told through the eyes of a child fleeing from their home to escape the war along with everyone else around them, leaving their belongings and their jobs to reach a safe life. It portrays the unimaginable decisions that parents take to ensure that their children are safe. With captivating images, supported by simple but effective use of language, this book gave us many ideas for our literacy teaching and inspired us to think of creative ways to help the children make sense of what they were learning. 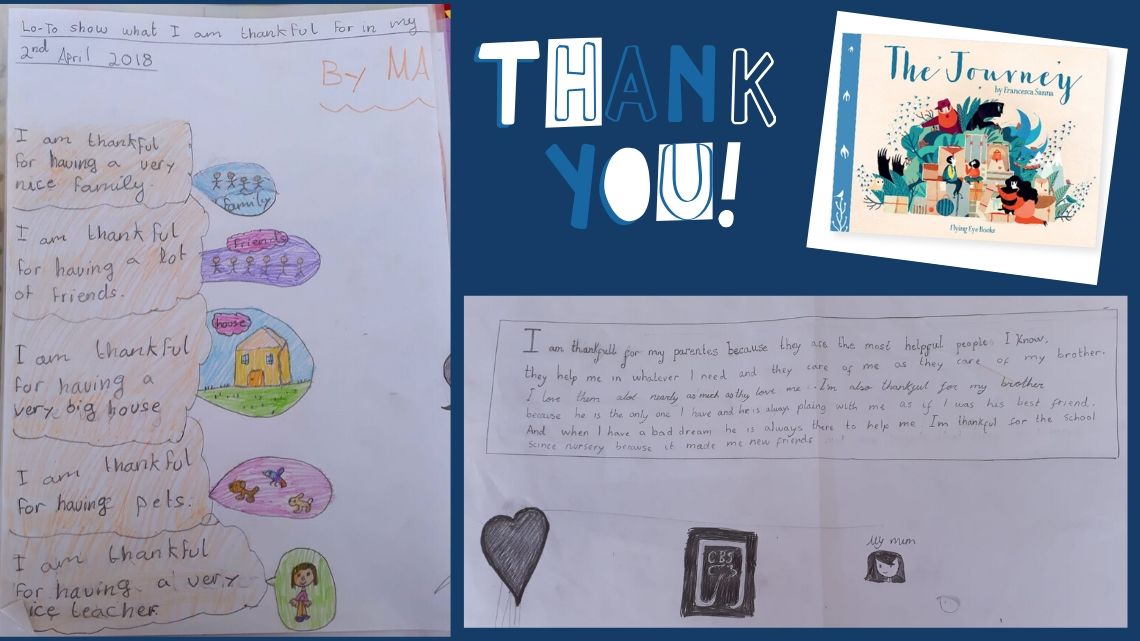 As seen in these examples many of the children appreciated the simple necessities of life: love, care, shelter and food.
Through responding to the illustrations from The Journey, the children were able to communicate their ideas with more ease, enabling the language barrier to almost be non-existent. Some were able to fully discuss ideas, others drew pictures and some had basic conversations in English, but we all had a new and collaborative experience where language was not a barrier. This did not need to be a week of writing; it was a week focused on expression and developing understanding of others.
Whilst many of the images in The Journey shocked the children into understanding the real terror that refugees go through, it also led them to consider the choices that the author had made, as this quote from an eight-year old demonstrates:
‘Maybe because the men in the picture are so big, it shows that the refugees are scared and feel little. There are always hands and eyes in the book which might mean that someone is always trying to find them or are watching them. Sometimes hands are to be kind like a hug, or hands can be mean like hitting.’

The reality of being a refugee

We also organised enrichment activities including songs and dances based on peace and artwork related to the country the children had been focusing on. A key activity was when the children took part in a physical refugee ‘checkpoint’ challenge. In this activity the children worked as a team in small mixed-age groups to build a shelter, carry water, find food, build a bridge and go through passport control. The checkpoint challenge was a great success as it enabled children to reflect on the realities of being a refugee.
Later in the week, the children enjoyed meeting Kone, a young adult refugee from Africa. CEAR supported Kone as a refugee when he first came to Spain and he continues to have a great partnership with them, helping and supporting them to raise awareness of the current refugee crisis. The children were excited to have the opportunity to listen to his experiences and to ask questions. They were excited to hear about his enthusiasm for running and that he is competing and winning races at a national level, with dreams of entering the Olympics.
After Kone’s visit, the children wrote about their dreams and aspirations and how they might be able to achieve this with motivation and appreciation of the opportunities offered to them. This enabled them to consider the impact of what they had learnt by putting their thoughts down on paper. The children were also able to make links with previous learning. As one eight-year-old commented;
‘l liked the book The Journey because it shows that you should never give up. Like Kone, he never gave up on his dream.’
The week ended with an assembly celebrating all the learning the children had done. The parents and children also had the opportunity to buy crafts and donated toys and books. All the money raised went to CEAR to help support refugees in Spain.
[ngg src=”galleries” ids=”23″ display=”basic_imagebrowser”]

The impact on the children was clearly visible from the response of parents as the week progressed. On a daily basis when parents came to pick up their children and heard about their experiences, they became increasingly more inquisitive and supportive of this important learning.
Designing the week around the book The Journey enabled us to introduce the children to this sensitive subject through a child’s point of view. The children also made the connection as to why this particular text had such impact on them:
‘The book The Journey was written as if it was the child speaking, this helped us to understand the journey of a refugee more because we are also children and get scared.‘ Nicolas, aged eight.
The book really made the children question their personal safety and the securities refugees have to fight for. As Daniel, aged eight, reflected:
‘Refugee week made me think about how lucky I am and how brave refugees are.’
Sofia, aged eight, perception of refugees had changed across the course of the week:
‘l now understand that refugees are also people like my family and friends, they had jobs and then had to leave their jobs so they could be safe.’
Katie, a teacher, summarises the impact of Refugee Week.
‘The children I teach are five — seven years old and it was incredible to see how much children so young got from the whole experience. I was really surprised by the wonderful and powerful poetry and story writing it generated as well as the in-depth discussions. At the end of the week, the children were not only more aware of the world they live in but they were able to really understand the struggles people face and how they can do something to help.’
During our refugee week, the children all showed maturity and curiosity towards the issues discussed and made it the success that it has been. Not only did the children raise money for CEAR but we also raised awareness of the refugee situation as individuals and as a school.
One of the most profound things to have come from our journey, is that children are still asking when the next refugee week will be almost a year on. Next time we plan to involve the wider community of Seville and hope that the children will be able to meet further refugees, in the hope of helping make the beginning of a refugee’s new life one that is worth the journey. 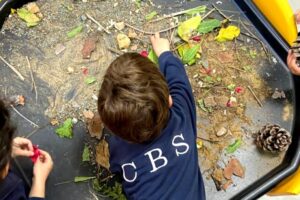 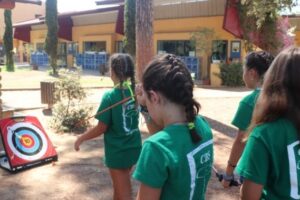 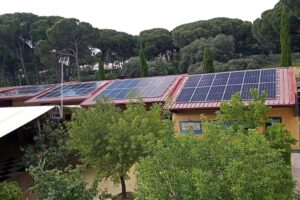 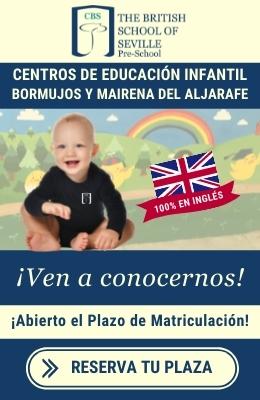 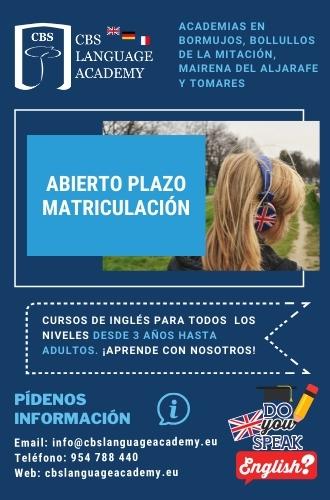 This website uses cookies to improve your experience while you navigate through the website. Out of these, the cookies that are categorized as necessary are stored on your browser as they are essential for the working of basic functionalities of the website. We also use third-party cookies that help us analyze and understand how you use this website. These cookies will be stored in your browser only with your consent. You also have the option to opt-out of these cookies. But opting out of some of these cookies may affect your browsing experience.
Necessary Siempre activado
Necessary cookies are absolutely essential for the website to function properly. This category only includes cookies that ensures basic functionalities and security features of the website. These cookies do not store any personal information.
Non-necessary
Any cookies that may not be particularly necessary for the website to function and is used specifically to collect user personal data via analytics, ads, other embedded contents are termed as non-necessary cookies. It is mandatory to procure user consent prior to running these cookies on your website.
GUARDAR Y ACEPTAR